The name „Na Louži“, i.e. „at the puddle“ first comes up at the beginning of the 16th century. This name may have been derived from the fact that rainwater from the higher located square collected here, and the nearby Vltava River caused frequent floods. These days the little square is dry and offers a number of interesting houses for sightseeing, a visit to the Wax Museum, as well as pleasant restaurants. 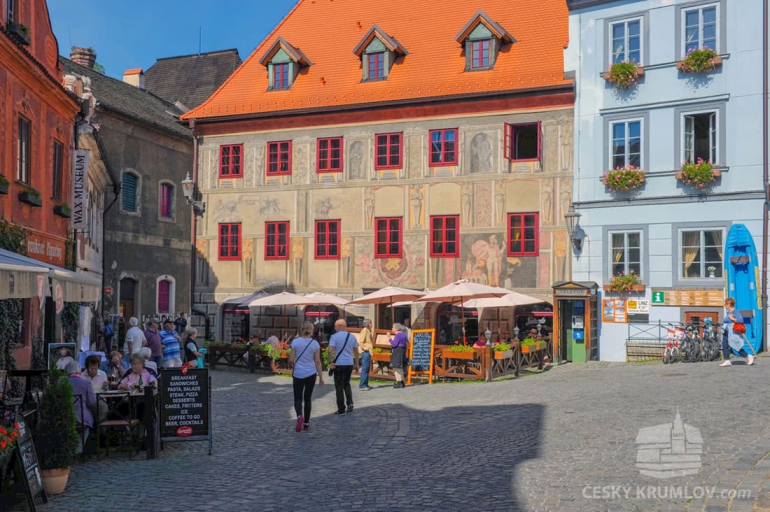 The corner house, originally built in the Gothic style, was rebuilt around 1580 and later, in the early 19th century. It stands out by its painted decoration of façades from the second half of the 16th century, when it was owned by the maltster Thomas, called Tomandl na Louži, or his son Philip Nuss. The painted decoration was later covered with new plaster, and it was not until 1952 that they were uncovered and restored by V. Terš. The façade in Široká Street is decorated with illusory windows with „inhabitants“ and a little monkey looking out. Whether they show the real occupants from the 16th century or whether it is a joke of the Renaissance painters cannot be found out. The façade in Kájovská Street has a wall painting of St. Florian, the protector against fire, and in the upper part, the apostles Jacob the Greater and Philip.

According to older literary sources, the Rosenberg regent Jakub Krčín of Jelčany lived in this house. Recent historical research, however, has reliably refuted this claim.

The Museum resides in a medieval house. The Classicist façade adorned with bell-shaped hangings flanking the windows was probably made around the year 1800, when this decorative motif appeared on several other houses in Český Krumlov. From the 16th century on, the house was the home mostly to craftsmen, but also to Jan Řehoř Mayer, who was the teacher of ball games at the princely court and owned the house from 1673.

In 2001, the Wax Museum was opened in the house, the installations of which present wax figures of well-known personalities of cultural and political life; among those the visitors can see are Tomáš G. Masaryk, Václav Havel, John Paul II, L. Armstrong, Salvador Dalí and others. Further the exhibition depicts the way of life of the lords of Rosenberg and the crafts of the Renaissance period.