The name reminds us that the place of the present street used to be the moat between the fortifications, called „parkán“. Starting in the second half of the 16th century, the inhabitants of Krumlov built houses here, with the no longer functional town wall becoming part of these houses.

These days, Parkán is one of the most picturesque streets in Český Krumlov. Apart from other places of interest, the native house (No. 111) of Egon Schiele’s mother is found here. 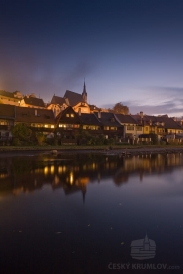 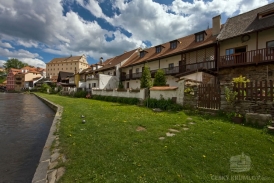 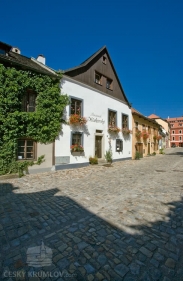 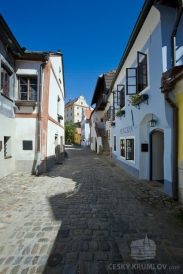 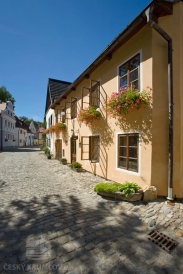 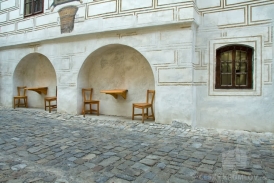 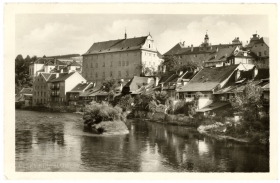 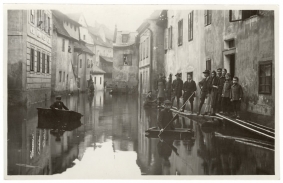 The house was attached to the town wall in the 16th century and gradually remodelled to its present-day shape. The façade has preserved the Baroque decoration in red and white, and two paintings of the Virgin Mary of Mariazell. The lower painting from 1714 is accompanied by a text of a prayer to the Virgin Mary to protect the occupants of the house. The building houses a tavern „U dvou Marií“ (The Two Marys) and a little museum of small craft products and building materials acquired during the research and repairs of houses in Český Krumlov.

One of the noteworthy houses in Český Krumlov, the history of which may largely be read from its façade.

The earliest sgraffito façade with the coats-of-arms of Wilhelm of Rosenberg and his wife Anna Marie von Baden was made around 1580, as this marriage lasted from 1578 to 1583. Later these sgraffiti were covered with new plaster and the then owner of the house František Häusler embellished the façade with a new coat-of-arms, to which he had the year 1762 and his initials added. In the following century, even this coat-of-arms was covered, and the façade was decorated with a painting of the Virgin Mary of Kájov accompanied by St. Florian and another saint. At present, there is a vegetarian restaurant in the house.