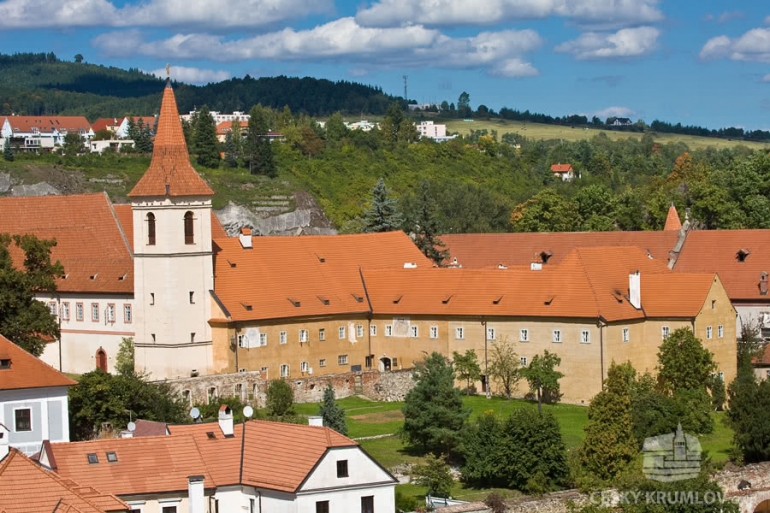 From the end of the 14th century, the complex also included a house for pious laic women, called „beguines“. The stay of the Clare nuns was  brought to an end by reforms of Emperor Joseph II in 1785, but the Minorites stayed in the monastery until as late as 1950. After that the monastery premises were used for secular purposes. As far as the Clare Convent is concerned, this situation has lasted until today, while the remaining part of the complex was acquired by the Order of the Knights of the Cross with a Red Star.

The monastery area is entered through a gate with the coat-of-arms of the Knights of the Cross, behind which a small park called Tramín is situated. 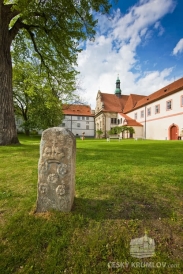 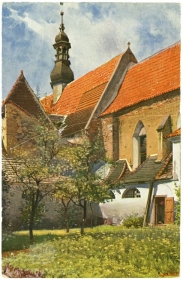 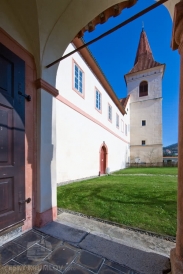 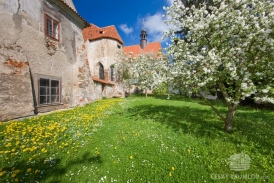 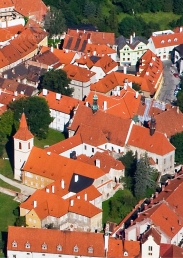 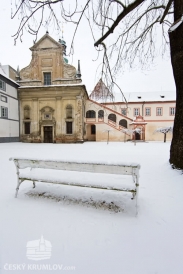 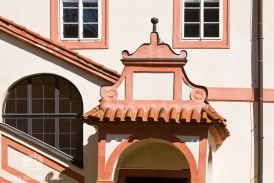 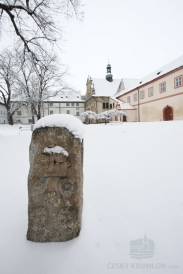 The monastery Church of Corpus Christi and St. Mary in Pain was consecrated in 1358, and in the years 1649 - 81 it underwent a Baroque rebuilding.

The interior of the church is a unique gallery of the Baroque church arts. The high altar was made by the order of the prince Johann Christian von Eggenberg and his wife Eleonore in the years 1679 - 82. Their joint coat-of-arms is situated in the middle part of the altar. The altar painting by Matyáš Leithner depicts the Virgin Mary with Christ and St. Francis, and the painting on the extension shows God the Father giving his blessing. The early Renaissance architecture of the altar is completed with statues by the Eggenberg sculptor Jan Worath. On the lower level from the left stand: St. Peter, St. Francis, St. Anthony of Padua, St. Paul, and above them,
St. Ambrosius with St. Augustin. The altar is topped with the statue of Archangel Michael with the humiliated Devil at his feet.

An outstanding work of woodcarving is the Baroque pulpit from 1746. Its oratory is adorned with a gilded relief depicting scenes from the life of St. Francis, and there is a sculpture of the Annunciation of the Virgin Mary encompassed by clouds and rays of light above the canopy. The attic of the canopy has the unified coat-of-arms of the donors: Prince Joseph Adam von Schwarzenberg and his wife Maria Theresia von Liechtenstein.

Another noteworthy part is the early Baroque altar of the Virgin Mary from the second half of the 17th century, situated at the southern wall of the church. It is adorned with a relief of the Coronation of the Virgin Mary and statues of St. Benedict, Bernard and St. John Evangelist.  There are three other altars located at the northern side, which have excellent woodcarving and sculptural decorations: the altar of St. Francis from 1741 with a painting of the Stigmatisation of St. Francis, from 1641; the altar of St. John of Nepomuk from 1740, which has statues of three Johns: St. John of Nepomuk, St. John Evangelist and St. John the Baptist. The third is the altar of St. Mary in Pain from 1727, whose Baroque decoration makes an impressive frame for the Gothic sculpture of the Pieta from c. 1350.

The southern part of the church is adjoined by monastery buildings. Their most important part is the cloister from around 1500. It is vaulted by a tracery vault and its northern wing is made up by a unique two-nave space divided by spiralled columns. In the middle of the western wing is the entrance to St. Wolfgang’s Chapel, consecrated in 1491. There are preserved partly Gothic wall and partly Baroque paintings from 1781 presenting scenes from St. Wolfgang’s life. Their author is J.V. Tschöpper. Inside the chapel, left of the entrance is attached the tombstone of Anna Vojířová, a member of the Rosenberg female retinue.

Another interesting tombstone is placed in the cloister, on a wall neighbouring with the monastery church. It is a tombstone belonging to the family of Michael Antonín of Ebbersbach, who lived at No. 77 Široká Street and was employed as an alchemist at the court of the Krumlov ruler Wilhelm of Rosenberg. After Wilhelm’s death in 1592, owing to fraud, he was put into castle gaol, where he died in 1593.

On the walls of the cloister hang paintings from the mid-17th century depicting scenes from the life of St. Francis, and in the eastern wing is installed part of the treasure of the Order of the Knights of the Cross. The inner walls of the cloister have windows with lavish late Gothic traceries opening into the „Paradise Courtyard“. In 1686, the Chapel of St. Mary of Einsiedeln was establi-shed in its middle, based on the model of the famous pilgrimage chapel in the Swiss canton of Schwyz. Above the entrance to the chapel the joint coat-of-arms of its founders, prince Johann Christian von Eggenberg and his wife Marie Ernestine, née von Schwarzenberg, is situated. In addition, there is an altar with the statue of the Black Madonna of Einsiedeln inside the chapel, dating from the second half of the 17th century.