The Roman Catholic St. Vitus' Church in Horní street in Český Krumlov is, after the castle, the second architectural landmark of the town. 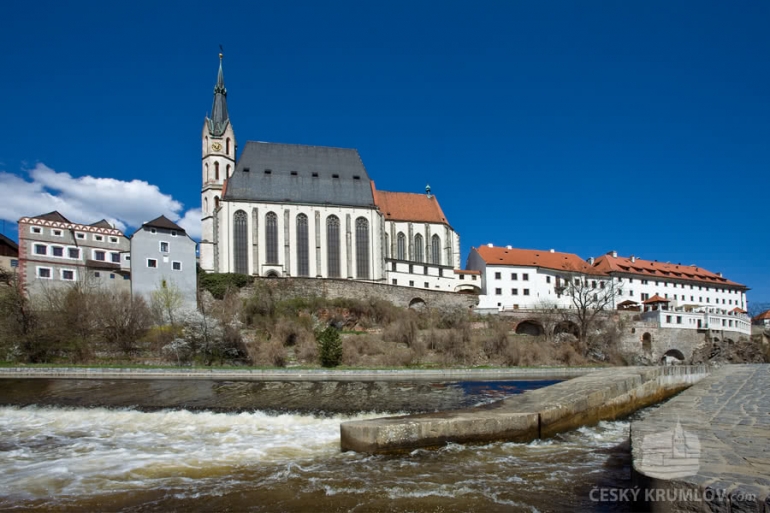 The church was built on the site of an older building, by the parson of Krumlov, Hostislav of Bílsko around 1400. The consecration was carried out in 1439. Around 1500, the burghers built a large music gallery in the western part of the church, and further important remodelling followed in the Baroque period. Apart from other things, a new sacristy was built on the southern side of the church, and the Chapel of St. John of Nepomuk was constructed at the expense of prince Franz von Schwarzenberg and his wife Eleonore Amalie in 1725 - 1726. Neighbouring it, the originally medieval Resurrection Chapel was remodelled in the 18th century. The church got new altars and other furnishings in the Baroque period too.

The architectural and artistic development of the church was finished by Neo-Gothic remodelling at the end of the 19th century. Since that time, only repairs and restoration work have been executed in the church. A more important change was made in the interior of the northern sacristy, where St. Wenceslas’ Church was established in 1997. 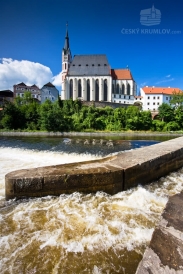 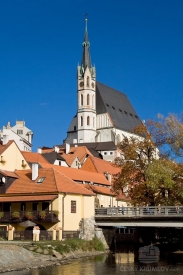 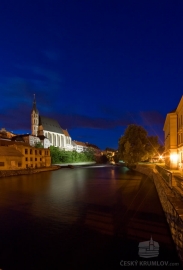 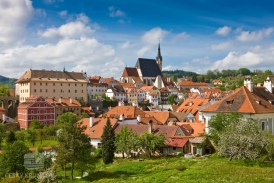 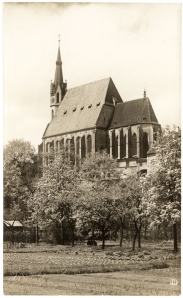 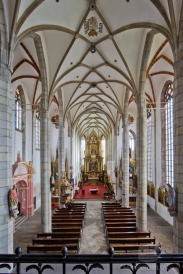 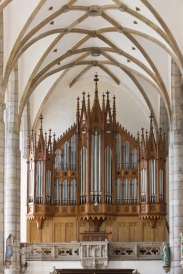 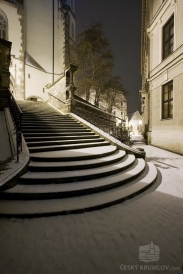 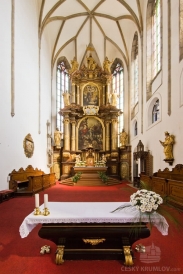 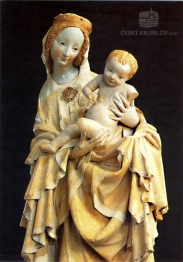 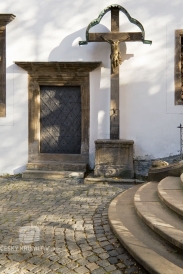 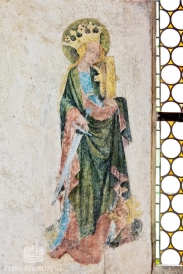 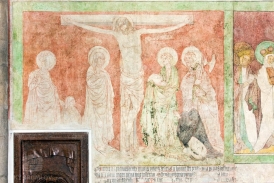 The inner space of the church has the form of a three-nave hall, which is typical of high and late Gothic periods. Almost the entire space of the church can be observed from one place; the height, width and length of the church are harmonically composed thus making up a unified and equally illuminated whole. The presbytery is closed up with the tracery vault constructed according to the example of the church in Milevsko. The tracery vault bears the coat-of-arms of Linhart of Aldeberg, who is believed to be the originator of the project. The vault in the side naves is a simple cross vault with masoned ribs.

The early Baroque high altar comes from 1683 and was made at the expense of Prince Johann Christian von Eggenberg and of his spouse Marie Ernestine née von Schwarzenberg. Their joint coat-of-arms is found in the middle of the altar. The high altar painting depicts the Coronation of the Virgin Mary, and the upper one above it the Coronation of St. Vitus. The altar is completed by statues of saints: the patron saint of the country,
St. Wenceslas is placed on the top, next to him, on the right St. Catherine, and opposite her St. Barbara. The ones standing in the lower row are: St. Ignatius of Loyola and St. Francis Xavier, and St. Peter and opposite him St. Paul on the lower level on the left.

The side altars of St. Francis Xavier and the Virgin Mary in the main nave were built in the years 1897 - 98 in the Neo-Gothic style. The Rococo pulpit is decorated with a relief of the Annunciation and a statue of Christ as the symbolic „Good Shepherd“.

There are two wall paintings in the left nave. The right hand side painting from the mid-15th century depicts St. Agnes of Rome, St. Elisabeth, St. Barbara and St. Catherine. The painting on the right, which is a little older, depicts the Crucifixion with St. John, Virgin Mary, St. Ursula, another saint and two kneeling donors.

There are tombstones from the tombs of Wilhelm of Rosenberg and his third wife Anna Maria von Baden put onto the wall on the sides of the entrance to the chapel. Originally, both of them were a part of a monumental tomb established in the presbytery of the church in the late 16th century. Next to the Chapel of St. John of Nepomuk is the entrance to the Resurrection Chapel, which was built in the Middle Ages and later remodelled in the Baroque style. Its walls were decorated with wall paintings by František Jakub Prokyš in 1777.

The small Baroque organ above the main entrance to the church comes from 1716, and the main organ was made in 1908 in the romantic Neo-Gothic style by the Prague organ maker Heinrich Schiffner.