A brief history of Český Krumlov

A brief history of Český Krumlov

A brief overview of the main historical events of Český Krumlov from the first mention of settlement to modern history and registration in UNESCO. 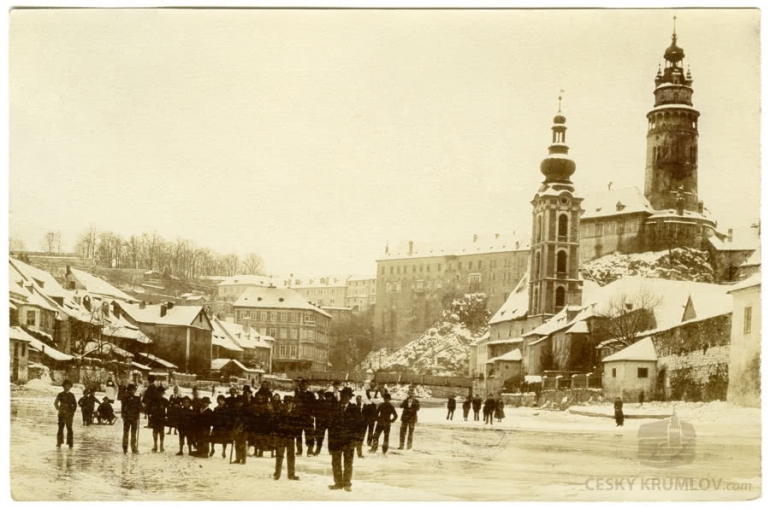 1253 - Krumlov, which has been called „Český“, i.e. Bohemian, since the mid-15th century, was first mentioned in written documents as the seat of Vítek, a member of the House of Vítek.

1302 - The Krumlov branch of the House of Vítek died out. Their property was passed on their relatives, the lords of Rožmberk (Rosenberg), who made Krumlov their family residence. The Rosenbergs, until their family died out in the 17th century, ranked among the most powerful aristocratic families in Bohemia and their members repeatedly held the highest offices in the country. Their lust for power frequently led them to conflicts with the sovereigns of the Bohemian Kingdom. It was thanks to the permanent care of the Rosenbergs that Český Krumlov became the centre of economy and culture of the vast Rosenberg domain in the South of Bohemia for the following three centuries. The coat-of-arms of the lords of Rosenberg was a red rose in a silver field, enriched with red-silver diagonal stripes in the lower part of the coat-of-arms in the second half of the 16th century.

Around 1300 - early 14th century - The gradual building of the castle of Krumlov. The older building called the Lower Castle, was extended by the newly constructed Upper Castle. There arose a settlement below the castle called Latrán, and it was probably Jindřich (Henry) I of Rosenberg who had the actual inner town established with the large rectangular square.

1st half of 14th century - Peter I of Rosenberg established the parish Church of St. Vitus in Český Krumlov, a hospital with St. Jodock’s Chapel, and endowed the town with extensive property privileges and was, together with his wife Kateřina, the founder of the Minorite Monastery and the Clare Convent.

1394, 1402 - In the course of the aristocratic resistance against the sovereign, the Bohemian King Václav (Wenceslas) IV was twice held prisoner in the castle of Český Krumlov.

1439 - The high Gothic remodelling of St. Vitus’ Church was finished.

1494 - The brothers of Rosenberg granted the town the royal right. This privilege permitted a free property inheritance, right of appeal in court matters and a number of other privileges.

1551 - 1592 - The ruler of Český Krumlov was Wilhelm of Rosenberg, who was, at the same time, holding the highest offices in the Kingdom of Bohemia, and owing to his influence he was called the „vice-king“ of Bohemia by foreign diplomats. Wilhelm of Rosenberg carried out a Renaissance rebuilding of the Gothic castle, and it was during his rule that the town changed its basic appearance, too. By remodelling the Gothic houses in the Renaissance style and by constructing new ones, the architectonic development reached its summit in its ground plan and in the main artistic and visible landmarks.

1555 - By the order of Wilhelm of Rosenberg, the formerly independent settlements of Latrán and that of the inner town were united to form a whole.

1584 - Wilhelm of Rosenberg invited the Jesuits to Český Krumlov and gave the impetus to construct the Renaissance Jesuit College.

1601 - Peter Vok, the last male member of the Rosenbergs sold the domain including the town of Český Krumlov to the Emperor and King of Bohemia Rudolf II von Habsburg.

1601 - 1622 - Český Krumlov was owned by Bohemian sovereigns. In the years 1606 - 1609 the castle became the residence of Emperor Rudolf II’s mentally deranged bastard Don Julius de Austria. His stay at the castle was accompanied by stormy excesses, which came to a head in the brutal murder of Markéta Pichlerová, the daughter of the Krumlov barber.

1622 -  Emperor Ferdinand II von Habsburg made a present of the domain, soon promoted to principality, to Johann Ulrich von Eggenberg to reward him for his services. The Eggenbergs’ seat was, since the mid-15th century in Styria, Austria, and they gradually acquired their property in Bohemia in the course of the 17th century.

1664  - The ruler of the principality of Český Krumlov is Johann Ulrich’s grandson, Johann Christian von Eggenberg (1641 - 1710), a successful manager and
a generous supporter of the arts. Johann Christian’s wife was Marie Ernestine, née von Schwarzenberg (1649 - 1719).

1719  - After Johann Christian von Eggenberg and his spouse Marie Ernestine died (1710 and 1719 respectively), the domain of Krumlov passed, through inheritance, to Marie Ernestine’s nephew Adam Franz von Schwarzenberg. The Schwarzenbergs came from Germany, and started to reside in Bohemia permanently in 1660.

1741 - 82  - The Krumlov ruler was Joseph Adam von Schwarzenberg. He continued remodelling the castle in the Baroque style, where he had, among other things, the Masquerade Hall established with wall paintings by Josef Lederer. In addition, he rebuilt the castle chapel, had the winter riding hall constructed and, in 1767, had the Baroque chateau’s theatre rebuilt so that it gained its present-day appearance.

End of 18th c., first half of 19th century Political changes, insensitive enforcement the principles of the Age of Reason, as well as the starting industrialisation resulted in the devaluation of a number of buildings of high artistic value in the town. In 1773 the Jesuit College was transformed into barracks; in 1782 the Clare Convent was abolished; in 1788 St. Jodock’s Church was abolished and later rebuilt into a tenement house and in the years 1835 - 1880 eight town gates were gradually demolished.

After 1850  - Český Krumlov as the seat of the district governor, district court and the financial office became the centre of administration, economy and culture of the newly establi-shed district. The economy developed and the population increased.

1911 - 1914  - The painter Egon Schiele, a leading personality of Austrian expressionism, lived in Český Krumlov and, apart from other works, he painted a number of pictures  with motives of Krumlov houses.

1939 - 1945  -  In the course of World War II no military operations took place in Český Krumlov and no material damage was impaired on the town; in May 1945 the town was liberated by the American Army. The expulsion of the German inhabitants (the town had been bilingual for centuries, Czech and German) resulted in an interruption of the cultural continuity and brought about a prolonged cultural stagnation of the town.

1947  - The castle and chateau in Český Krumlov were, alongside other Schwarzenberg property, transferred into state ownership.

1963  -  Together with other historical towns, Český Krumlov was declared an urban reservation area, and a renovation process of the reservation was started.

1992  -  Český Krumlov was put on the list of the UNESCO World Cultural and Natural Heritage. The town became a well-known tourist centre as well as the place of a number of important cultural events.