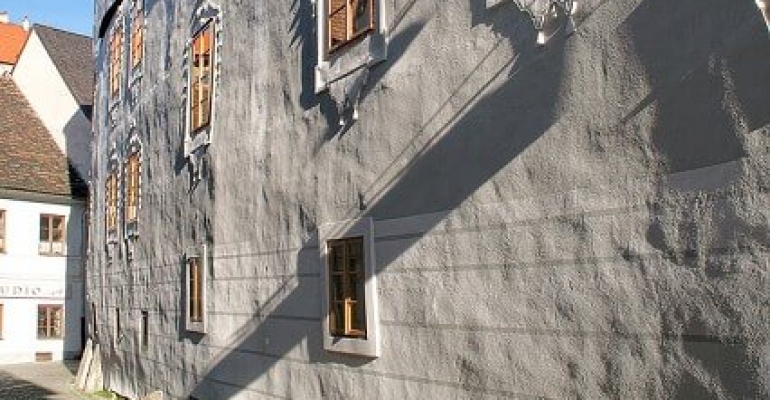 The façade in Panská Street has a sgraffito decoration from the second half of the 16th century with the figure of the Rosenberg trumpeter Gregor (picture on the p. 36). On other façades, the Classicist decorations of windows from the late 18th century, consisting of typical bell-shaped hangings, tassels and volutes and the green colourfulness of the early 20th century were restored in 1997. There are, how-ever, various other solutions concealed under this layer. A commemoration of the late Gothic rebuilding of the house is the master sign of the Krumlov stonemason Michal Rubík, which is found on the corner of the house -    .  The same sign was chiseled by Michal Rubík onto the family tombstone, which now placed on the wall of St. Vitus’ Church in Český Krumlov.

There are Gothic, Renaissance and Baroque vaults found inside the building, as well as an impressive inner courtyard with a Renaissance loggia. It may have been this loggia, which is so typical of constructions of the Italian Renaissance, which gave the building its name: Italian Court. It used to be inhabited by a number of prominent people. The most important of them was undoubtedly the well-known founder of ponds and the main regent in the domain of the lords of Rosenberg, Jakub Krčín of Jelčany, who lived in this house after 1580. The man who dwelt in the house shortly after him was the painter Bartoloměj Beránek-Jelínek, the maker of, among other things, the decoration of the castle tower.